PlanetTogether provides users with the option to update the progress of activities as work is completed on the shop floor. Updating the activity status can be done manually or automatically depending on the company's preference regarding where the job progress should be reported. Generally, the Activity Status is recorded in the company's ERP system and imported into PlanetTogether by refreshing the data. However, the activity status can be updated manually in cases where PlanetTogether is used as a standalone product or if the manufacturing capabilities of the company's ERP system are weak.

There are three ways that the Activity Status can be updated in PlanetTogether, discussed below:

Visualizing the Status of an Activity

Moving into the "Status" tab of the Operation Header will allow us to begin updating the Activity Status. Here you will notice that there are several options that are not accessible in the following methods of updating Activity Status. This is the most in-depth method of updating Activity Status. Here we can change the Production Status and Report Quantities (either Good or Scrap), along with the Reported Setup Hours, Run Hours, and Post-Processing Hours. Reporting these quantities and hours also benefits the Performance Tracking functions in PlanetTogether and is helpful in being able to come to more accurate time standards over time.

Once an activity is marked as "Finished" it will be removed from the schedule. If a Time or Quantity is reported but the activity is not set to "Finished", then its scheduled length will be adjusted based on the reported values provided.

The values stored in the manual finish will override any subsequent reports coming from the ERP system about the activity.

The Time-Based Reporting feature allows the reported quantities and hours of activities to be automatically updated as the schedule clock is advanced.

The Time Based Reporting feature can be accessed and set up from the Jobs Dialog, under the Operation | Status tab:

Additional information on Time Based Reporting can be found here.

PlanetTogether is intended to allow users to interact with the data in whatever format or configuration comfortable for them. Where the Operation Header might be more comfortable for users who are accustomed to working with spreadsheets and tables, the Gantt may be preferred for ease of use.

Instead of double-clicking on an Operation on the Gantt, the Activity Status dialog can be opened by right-clicking the Activity and selecting "Activity Status" From here, the vast majority of the same options are available, except for the option to enable Time Based Reporting. 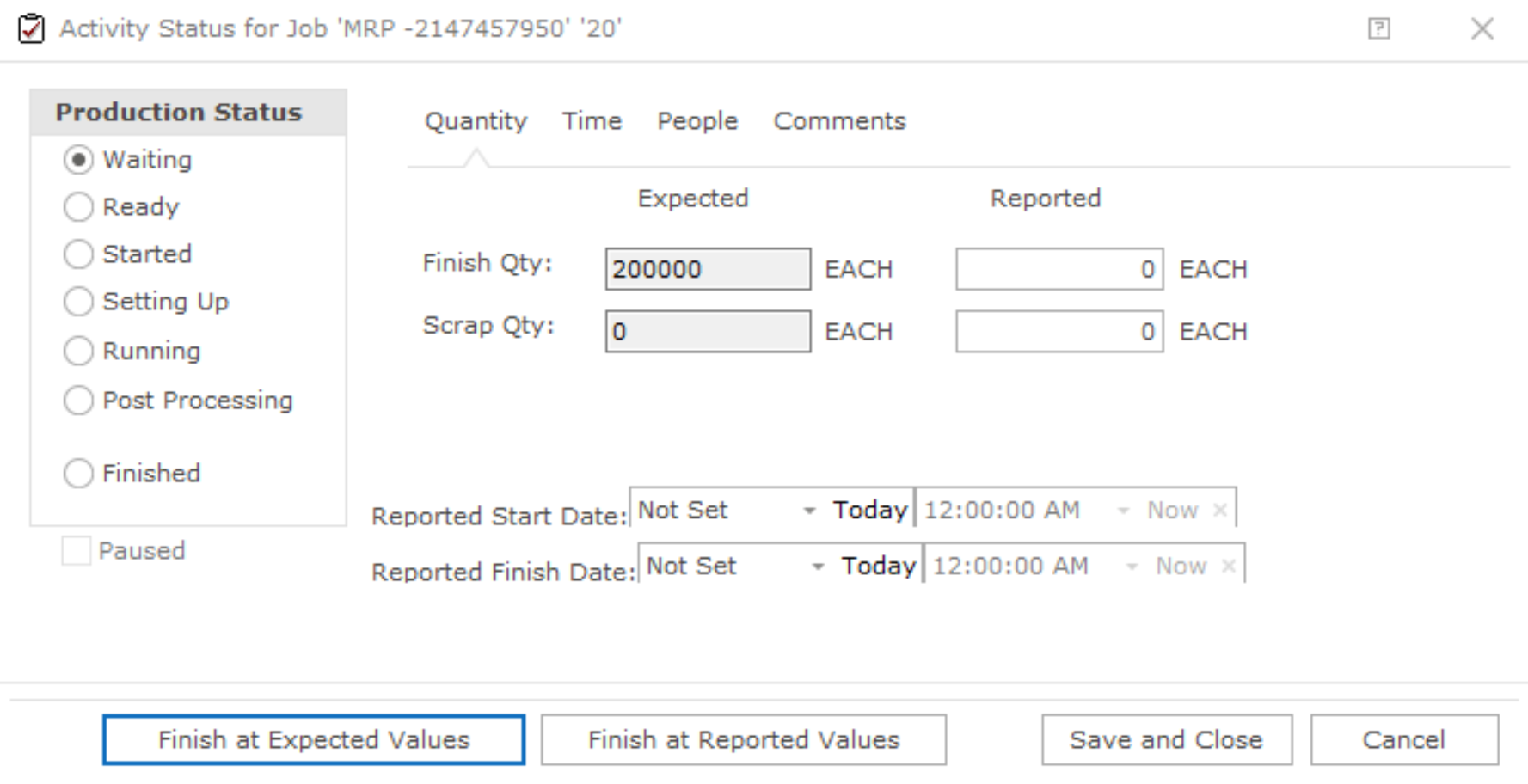 Similar to the Activity Status Dialog, the activity Scheduling Grid can be accessed through the Gantt chart, this time by right-clicking on the Resource that is assigned to perform that activity. Unlike the previous two methods, the activity Scheduling Grid displays all the activities scheduled to that Resource for the duration of the Planning Horizon. However, only the first scheduled Activity can be updated and must be marked as Finished before the next activity can be updated.

Visualizing the Status of the Activity

There are different Gantt label segments that make it easy to visualize the status and the progress of the activity directly from the Gantt view. As progress is reported, the size of the activity block will also shrink.