Note: This feature is compatible with PlanetTogether version 11.39 and later.

Standard Reports: The following standard reports are available when downloading PlanetTogether. These reports are accessed from the Ribbon in the software and they have their data source schema set to PtDbDataSet which means that the report will load the entire dataset.

Named Reports: The following reports are loaded from the Jobs view. These reports can be modified by the user but their data source schema cannot be changed to another dataset. The user can only modify the fields being displayed in the report.

The report files are located in the following path:

In order for the report fields to be bound to the PlanetTogether data and display the correct information, a data schema will need to be specified within the Report Designer. This can be done by opening the .repx file you wish to modify by clicking the folder icon in the upper-left corner of the screen.

The report files are located in the following path:

In the Properties tab of the Report Designer, set the Data Source's Schema from the Miscellaneous tab:

To set the Data Source's Schema, click on the ellipsis button at the end of the text field and navigate to the location of the downloaded schema file on your computer.

The data schema files can be downloaded here:

Note: These data schemas can be attached to the reports.

When saving reports, ensure that they are located in the "Standard Reports" folder: 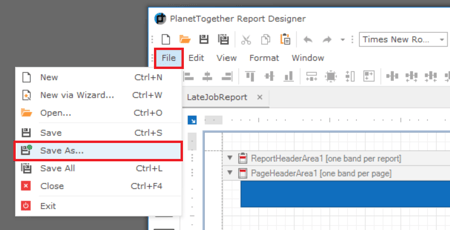 We recommend saving new reports in the Client Updater Service folder to ensure that the reports are accessible for all clients. The reports can be saved in this location:

Reports can also be saved locally in the following location:

For instructions on how to create and modify reports using the Report Designer, please use the following guide.