Use of material with lots of minimum age:

Material Requirement's MinAge property allows you to specify how old lot controlled materials must be to be able to satisfy a material requirement. For example, if cheese must have aged at least 3 weeks, you would specify this in the MinAge of the material requirement. The age of a material is determined by the difference between the simulation clock and the lot's production time.

To use this feature:

In a material requirement for the item, specify the minimum age of the material.

MRP: Add option indicating whether a partial supply is allowed or not:

Added a new Resource property that displays the number of activities currently scheduled on the resource. This is available on the Activities grid and in Gantt labels.

A new Gantt block segment displays information about material availability and the commitment status of material sources. A different color is displayed for each of the following four material statuses:

The existing status segment will no longer display information relating to material status.

Prepend setup to the start of a block if a move causes it to gain setup:

Attempt to prevent a block from ending later by prepending any new setup added to it when the block to its left is moved. For example if jobs A, B, and C are scheduled on resource 1 where C has no setup time. Block B is moved to a different resource and a sequence-dependent setup is added to block C. As the system currently works, the setup time will extend the block causing it to complete later. This new enhancement will attempt to add the setup time before the start of block C so its end time isn't affected.

Note the following behaviors of this feature:

CTP can now be called form a soap API.

New optimize rule that takes into account the remaining days on hand of a product. 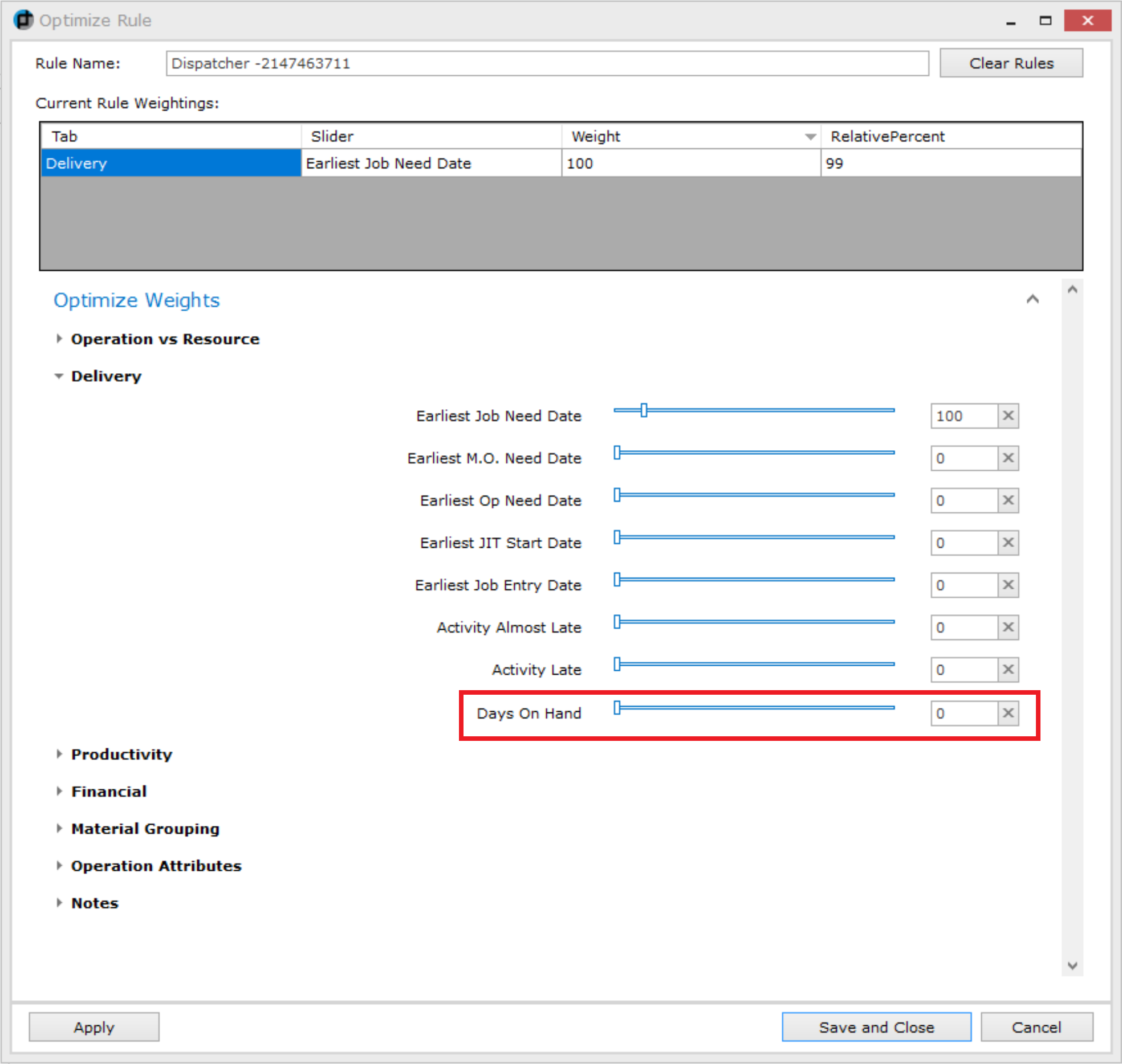 Operation MaxDelay field is now shown as a column in the Activities Grid.

A new feature allows an additional quantity to be displayed on campaign labels on the Gantt. To enable it, create a User Defined Field on the Item record that is the product in a campaign. Name this UDF as "AlternateUOM_LABEL" where LABEL is a unit of measure that will be displayed following the quantity. The UDF datatype should be Double. The value of UDF will be multiplied by total campaign quantity to arrive at the new quantity to be displayed.

Addition of Material Post-Processing as an option for product rules.

Shelf life penetration and WIP inventory duration material properties added. This is available in the published data and on the Materials grid.

Limit AutoJoin based on material availability and transfer qty:

A new Customization point has been added to handle custom logic for how and when jobs are joined automatically. AutoJoin can now be run as an option when committing the schedule.

Successor MOs linked in templates will now be added to the jobs created by MRP.

The service logon account can now be specified in the Instance Manager for Interface and Extra Services.

If a move results in more than 1 resource requirement of an activity being scheduled on the same multitasking resource and the total required attention exceeds 100%, the move will get stuck.

Resolution: such moves are now rejected.

Resource requirements that don't require any time are scheduling for a small amount of time. For example if an operation has a helper resource requirement that's only necessary during post-processing, a small block will be scheduled for the requirement even if no post-processing time is required. Not only does this create unnecessary blocks, but it will also delay scheduling the operation if something is already using the helper resource.

Resolution: Helper resource requirements that don't require any time will no longer be scheduled. This will eliminate unnecessary blocks and may allow operations to schedule earlier since the helper resource is no longer required.

Tanks: No adjustments if not all material is withdrawn:

Tanks that do not get fully emptied will now show inventory usages to help diagnose remaining material.

Fixed issues where using windows resolution scaling on the default monitor would result in cut-off text and other display artifacts.

Addition of UDF values to the Product Rules grid.

Messages received after a move will no longer be shown twice.

Improve the naming of BaseObjects:

Resolved an issue that was causing new objects to include long numbers in their names, after their type.

Functionality now matches Activities Grid in job dialog, where an activity can be marked as finished no matter the quantity of the goods that is reported.

Removed SetJobNeedDatesOnly from the list of options for MrpProcessing field on Inventory.

Speed up the performance of multitasking resources:

Changes have been made so that optimizes and adjustments to schedules with multitasking resources are about twice as fast as they use to be. The time has approximately been cut in half.

Made changes to avoid unnecessary processing and improve the performance of the Capacity Plan.

JIT Start date not calculating correctly for one activity:

The JIT start date is calculated by finding enough capacity on a sample resource that is eligible to fulfill the primary resource requirement.

If the sample resource doesn't have enough capacity between the operation's need date and the clock, the JIT start date will be calculated incorrectly.

For example, if an:

Production Plan report can now display quantities produced in an alternate unit of measure. To enable it, import or add a user defined field to the item record with the name "AlternateUOM_LABEL" where LABEL can be any string, with the data type of Double. If all products being displayed in the report have this user defined field, then a drop-down will be displayed that will allow you to pick between Default and "LABEL" units of measure. The option of Default will display information as before and LABEL will multiply the default quantities with the value imported into the UDF mentioned.

JIT Start Date being calculated based on wrong resource capacity:

Materials grid shows shortage when a job is in production:

If ProductionStatus of an Activity is set to Running or later (PostProcessing, Finished) then the material is assumed to have already been consumed and reflected as such in the inventory. In this case, no material constraints are applied. The Changed Materials grid will show 0 UnavailableQty when an activity has the status of Running or later.

MO no longer unscheduled when successor MO link is removed:

Material Linkage on the Gantt:

Purchase Order dates will now be more accurate when generated from MRP.

Successor Processing not working as expected:

Updated to Setup Code info in the Eligibility Dialog to include both the code and its value in the display.

Update to Setup Code info in Eligibility Dialog to include both the code and its value in the display:

Jobs and MOs will not show 100% completion unless all operations are finished.

PlanetTogether now automatically deletes split jobs if they were replaced and have a maintenance method value = ERP,  but they no longer exist in the data source.

Add visibility to the OperationBatchCode value in the Activities Grid.

MRP manufactured safety stock jobs should be needed no earlier than lead time:

Production Jobs for manufactured order items created by MRP will now not be needed earlier than their lead time. This will reduce the late jobs created by MRP. These MRP orders can still be optimized by priority or by other properties.

It is no longer required to import operation customizer fields to enable a Time Customization or an Operation Scheduled Customization.

Resolution: If there is a warehouse that has enough material, the material requirement will be fulfilled from it.

Fixed the auto-delete to include finished jobs.

Fixed an error preventing resource connectors from being imported.

Fixed issue where the Gantt was not refreshing on Capability updates.

New items created with the Maintain Inventories dialog can be set to lot controlled on creation.

Fixed an issue that could cause an error when unscheduling a job with or without successor MOs defined and those with job links.

Import timing out and freezing computer:

Resolved an issue where the program could freeze after import.

Fixed an issue where impact data was not recalculated after certain moves.

Optimize stops at 10% and freezes:

Fixed an issue that could cause optimization to freeze.

Fixed an issue where if an Operation doesn't have any eligible resources, then calculating its JitStartDate would result in an error.

Fixed an issue with overlap that was slowing optimize performance.

Jobs pulling material from on-hand instead of allowed lots:

Fixed an issue that could cause an error when switching user language.

Job.OrderNumber is updated during MRP when a Job is not deleted and its production is allocated to the new demand.

MRP doesn't create a job even if material from a lot is expiring:

Character "d" in "Planned" in MRP options was cutoff.

UnavailableQty column in materials grid was not taking into consideration shortages

The end of shelf life is being incorrectly calculated for tank resources:

If jobs are being scheduled on tank resources, the end of shelf life may be calculated incorrectly. Resolution: resolved.

Max delay is not working:

Operations that are supposed to be constrained by max delay are being scheduled with a larger delay between the operations than specified.

Track actuals were not working, when a qty, start date, and date are specified and the operation is marked as finished

Expedite not finishing: Simulation is stuck:

Fixed an issue that would cause expedite to not complete.

Capacity Interval conversion to instance does not replace underlying interval:

Fixed an issue that could cause splitting of a recurring capacity interval to cause overlapping intervals.

Fixed an issue where Activity Links stopped displaying after the year 2020.

The Department Report was fixed to show the correct Shift Start and Shift End values.

Fixed an issue where other user's action message was showing when the Show Other User Actions setting was set to false.

Material sources are now more accurate when used with overlap.

Fixed an issue in MRP that would cause the application to crash.

Fixed an issue where an error related to accessing Undo Sets occurred when loading large scenarios.

Update to RegenerateJobs action of MRP to include preservation settings in the calculation for "Preserve..." settings.

Fixed an issue where an error occurred when trying to open the Alternate Path Selection Dialog.

Fixed an issue where opening the Eligibility Dialog after deleting an alternate path caused NullReferenceException.

Fixed an issue where a job would fail to schedule in certain cases when MOs were finished.

Updated the RegenerateJobs' action of MRP to include preservation settings in the calculation for NetChangeMRP.

Object reference not set to an instance of an object.

Fixed an issue where the Gantt would get an error when clicking a block with successor MO links.

Fixed an issue where the capacity plan would show incorrect resource utilization when operations with zero remaining quantity to process are scheduled and not finished.

Fixed an issue in the Jobs Dialog that occurred when leaving a numeric field blank before saving and closing the dialog.

Production Status: Activity is Waiting when should be Ready:

Fixed some cases where an operation status should be Ready but was set to Waiting.

Fixed an issue where clicking on another Scenario Tab caused an error in the grid layouts dropdown.

Fixed an issue where an error occurred that prevented a user from adding a UDF manually from a machine with the language not set to English.

EmptyBatch after import and Optimize:

Fixed an issue that could cause a corrupted scenario when importing bad data.